Canada has become one of the top destinations for international students. It’s a large, multicultural country, with top-rated universities, and a plan to welcome more than 1.2 million new permanent residents by 2023.

Chinese students are attracted to the most prestigious schools in large, cosmopolitan cities, with Toronto and Vancouver being the top destinations. Vancouver was rated in Economist Intelligence Unit (EIU) as the 3rd Most Livable City in the World, moving up from 6th in 2019. Toronto was rated #7 for two consecutive years, 2018 – 2919, and #4 for the three years prior.

These are the top five Canadian universities for Chinese students, based upon the number of Canadian study permits issued:

U of T is structured like a collegiate system. You can be part of a large university while attending one of the best colleges within a university. The school offers a wide range of undergraduate and graduate programs.

Notable University of Toronto alumni include writers Michael Ondaatje and Margaret Atwood, and 5 Canadian Prime Ministers. 10 Nobel laureates are affiliated with the university, including Frederick Banting.

2 York University: Like U of T, York is a highly regarded institution situated in Toronto. York was recognized as a global leader for three consecutive years in the “Times Higher Education Impact Rankings, 2021 Rankings”. York placed 11th in Canada and 67th globally.

York also ranked in the top 4% globally in two United Nations’ Sustainable Development Goals (SDGs) that closely align with the strategic focus of the University’s Academic Plan (2020), including 3rd in Canada and 27th in the world for SDG 17 – Partnerships for the Goals – which evaluates how the University supports and collaborates with other universities in working towards the SDGs.

3 University of British Columbia: UBC ranked second in “The Times Higher Education Best Universities in Canada, 2020 Rankings” under the top 10 Canadian universities, and it came in 34th globally. The school earned its rank for the international scholarships available to international students, its reputation for research and its distinguished alumni. UBC also placed #2 Best Overall in Mclean’s “Canada’s best universities by reputation: Rankings 2021” list.

Another big attraction is that the climate on British Columbia’s coast is much milder than the rest of Canada.

4 University of Waterloo: The University of Waterloo (UW) is located just one hour west of Toronto. The school ranked 8th in Canada in “The Times Higher Education Best Universities in Canada, 2020 Rankings” under the top 10 Canadian universities. The school is known for its engineering and physical sciences programs, and Times Higher Education Magazine placed it in the top 75 programs worldwide.

5 Western University: Coming in 5th in the number of study permits issued to Chinese nationals, Western is known for its academic programs and research discoveries. Located in beautiful London, Ontario, Western ranked 9th in Canada in “The Times Higher Education Best Universities in Canada, 2020 Rankings” under top 10 Canadian universities.

McGill University: McGill ranked 3rd in Canada, and 42nd globally in “The Times Higher Education Best Universities in Canada, 2020 Rankings” under the top 10 Canadian universities. McGill is also the only Canadian university listed in the World Economic Forum’s Global University Leaders Forum. The school offers more than 300 degree subjects to more than 31,000 students, from 150 countries.

McMaster University: McMaster ranked 4th in Canada, and 72nd globally in “The Times Higher Education Best Universities in Canada, 2020 Rankings” under the top 10 Canadian universities. The campus is located just over an hour southwest of Toronto. Students and faculty come to McMaster from more than 90 countries.

McMaster is recognized as a medical school, through its research in the field of health sciences, but also has strong business, engineering, humanities, science and social sciences faculties.

The University is known for its business graduates and for graduates who make significant contributions to scientific research. Distinguished alumni include 10 premiers of Quebec and former Prime Minister Pierre Trudeau.

University of Alberta: The U of A ranked 6th in Canada, and 136th globally in “The Times Higher Education Best Universities in Canada, 2020 Rankings” under the top 10 Canadian universities. It’s the fifth-largest university in Canada, with 41,000 students at five separate campus locations.

U of A is considered a “comprehensive academic and research university” (CARU), which means that it offers a range of academic and professional programs that generally lead to undergraduate and graduate-level credentials.

University of Ottawa: U of O, is a bilingual public research university in Ottawa. It’s the largest English-French bilingual university in the world. The school is co-educational, enrolling more than 35,000 undergraduate and over 6,000 post-graduate students. The school has roughly 7,000 international students from 150 countries, accounting for 17 percent of the student population.

Distinguished alumni from the University of Ottawa include the Chief Justice of the Supreme Court of Canada, Richard Wagner, former Ontario Premier, Dalton McGuinty and Alex Trebek, former host of the TV show Jeopardy!

1 Fraser International College: FIC is a private college on Simon Fraser University’s campus. The college offers international students a direct pathway to degree programs at the SFU university. The courses at FIC are designed in consultation with faculty and departments in SFU. FIC offers 1-year pre-university programs and guarantees direct transfer to SFU when GPA reaches the standards according to the various majors.

2 Seneca College: Located in Toronto and Peterborough, Seneca International Academy is a multiple-campus public college that offers a world-class education that’s recognized globally; with degree, diploma and certificate programs. There are 145 full-time programs and 135 part-time programs at the baccalaureate, diploma, certificate and graduate levels.

5 Fanshawe College: More than 6,500 international students choose Fanshawe each year, from over 100 countries. The college offers more than 200 post-secondary certificate, diploma, degree and graduate programs, and has been offering real-world career training for 50 years as a full-service Government of Ontario community college. Their London, Ontario campus boasts state-of-the-art learning facilities.

The average international undergraduate tuition cost in Canada is currently $33,623, according to Statistics Canada. This represents a 7.1% increase in the 2020/21 academic year. Since 2016, roughly two-thirds of international students studying in Canada have been undergraduates.

If your course is longer than six months International students require a study permit in Canada. To apply for an initial study permit you will need to create an account on the IRCC website or sign in. Your IRCC account lets you start an application, submit and pay for your application and receive future messages and updates related to your application.

Before you apply online, you will need access to a scanner or camera to create electronic copies of your documents for uploading. And you will need a valid credit card to pay for your application.

Answer the online questionnaire and specify “Study Permit” when prompted. You will be requested to upload supporting documents and your completed application form.

You will need these documents to apply for your study permit:

Your school must send you a letter of acceptance. You will upload an electronic copy of your letter with your study permit application.

You must have a valid passport or travel document. You will upload a copy of the information page of your passport. If you’re approved, you must then send in your original passport.

You can prove that you have the funds to support yourself with:

After you click the Submit button, you will pay your application fee. As of November 30, 2021, IRCC no longer accepts payment with debit cards using Interac® Online, but they still accept all Debit MasterCard® and Visa® Debit cards.

Study permit: Get the right documents

Study permit: How to apply

Study permit: After you apply 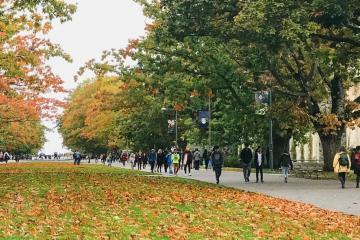 Study Permit: How to Apply to Study in Canada

As an international student in Canada, obtaining a study permit is essential in order to legally study at a designated learning institution (DLI). It is important to note that a study permit is a specific Read more…

Studying in Canada for International Students

Why study in Canada? Canada is one of the top choices for international students throughout the world. The high quality of life in the country, the depth of the educational choices that are available to Read more…